Ehwaz rune reversed meaning reading at its appearance in the runic divinations layouts – In fact, nothing critical and bad happens at this moment, it just takes a person time to think things over, to make the right decision. When the return Ehwaz arrives, it is important to realize that you can only choose one thing – it is impossible to chase two hares and catch both of them at once. Choosing something, we give up something else for good.

So, the main theses for the Ehwaz rune meaning in a reversed position in the interpretation of the runes in the scenario – hindrance, displeasure, dissatisfaction, feebleness and painfulness

Anglo-Saxon name, the meaning of the rune Ehwaz, Ayvos (Ehwaz): Eh or Eoh

Rune Ehwaz reversed, merkstav at the beginig its literal meaning was:

Most importantly, Ehwaz rune reversed at extended meaning defines as:

The main meaning of the Ehwaz reversed in an inverted position – “painfulness, obstacle, dissatisfaction”

Rune Ehwaz reversed – key concepts. Unexpected changes; quick trip; let; long way; forced rest (idleness, simple). The fallout of rune Ehwaz reversed shows that there is some kind of obstacle; something hinders your further progress. This does not mean that chaos is coming or is it your fault. All your actions are correct and timely, and the path you have chosen to achieve the goal, only correct. In other words, the one who caught the bird of fortune by the tail, as well as the one who, all the time, is testing it, will not stumble upon closed doors.

Council of the rune Ehwaz reversed in the opposite, upside-down position. Avoid conflicts and unnecessary quarrels, do not risk in vain, be patient, and wait for the situation to mature. The answer to the runes is Ehwaz reversed is not negative, it simply gives a sign that a delay is inevitable and gives the advice to wait. Try to unwind. Do not be upset if everything happens not to stand at the speed you expected. Rune Ehwaz reversed says: the movement is inhibited, but you should not blame yourself, and you should not expect anything worse. Perhaps this is the time for rest and uploading. Do not be discouraged; you just need to allow what happens to happen, without pressure and unnecessary movements.

The Ehwaz rune in the opposite position indicates the choice of the right direction. The situation is under control, its deterioration is no longer expected, now patience and endurance are needed. Any changes in your life will occur only when you are not only ready for them, but also open to accept them with gratitude.

Runa Ehwaz recommends avoiding any conflicts and not wasting energy and energy. Use this period to your advantage. Gain new strength for new achievements.

a little more about the meaning of the Ehwaz reversed rune

The meaning of the inverted rune Ehwaz reversed. As we mentioned earlier, the meaning of the Ehwaz reversed will still not be bad, just its energy will begin to manifest itself not so actively and brightly. Most often, the reverse Evaz comes when a person does not notice the news that comes to his life. Such “blindness” may be associated with unwillingness to accept what one does not want. In fact, under Ehwaz reversed, the movement path is open for a person, but he hesitates, does not feel that he needs to start moving right now. Perhaps something seems to him untimely, irrelevant, unimportant. He seems to leave these open paths “for a rainy day”, in reserve, thinking that at any moment he can return to them later.

We either accept the change and open the door, or close it with a key and exit through another exit. When divining, the meaning of the Ehwaz reversed is a kind of surprise effect. A sudden trip, an abrupt change of circumstances, events for which we were not ready. This is not a negative (if there are no other negative symbols nearby), but simply a situation that we did not expect, or expected, but later. If we ask the runes about whether it is necessary to take the planned actions, and in response comes the opposite Ehwaz – this is advice that it is better to postpone the implementation of plans. The reverse rune says that the existing health problems will not cause serious harm to the body. Yes, they are, but all this will surely pass – you just need to wait for a little.

Runa Ehwaz in combination with other runes.

Delusions in which a person is

Decision making should be postponed, а fortuneteller should seek advice from an experienced person whom he trusts

Travel delays will be due to the intrigues of competitors

Such a bundle hints that not everything is going smoothly in the relationship due to the fact that the partner of the questioner is in fact not his real other half.

The additional interpret of the Ehwaz rune at reversed or inverted position meaning.

The additional meaning of the rune Ehwaz in an reversed position. “tangle, turmoil” 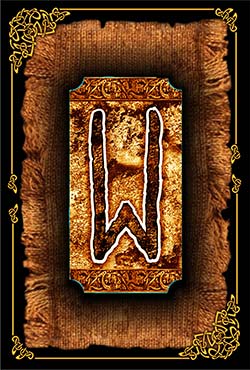 Now is the time when not all opportunities are open for you. We must calmly wait. Rune Evaz, Iwos (Ehwaz) is the rune, whose action in an inverted (reverse) position is similar to the action of a direct rune, only in a less active, not very pronounced aspect, more secretively. We rarely manage to reflect on the fact that we persistently and consistently don’t want to notice anything new that is unacceptable to us. We are blind and in the exact meaning of the word. We do not see changes that must be noticed and accepted to renew vitality.

The meanings of the Rune Ehwaz reversed in runic divinations are very interesting.

In the inverted position, the rune Ehwaz symbolizes the difficulties that will constantly arise on your path. This is the rune of long roads and unwanted unsuccessful trade deals and changes. Another interpretation of the rune, speaks of a period of forced inactivity. Specific issues in the current situation are being resolved slowly. There are a number of obstacles you cannot deal with.

The Rune EHWAZ in its non reversed, normal (forward) meaning always has a more positive connotation