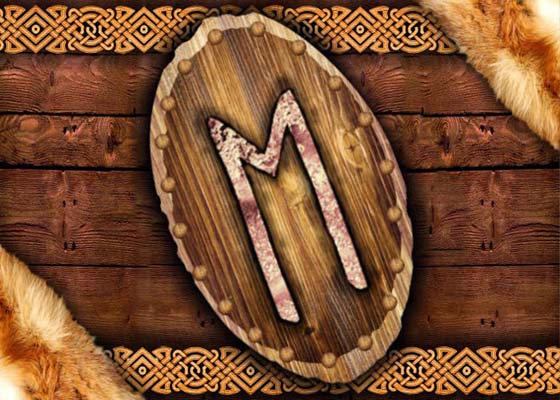 Anglo-Saxon name, the meaning of the rune Evaz, Ayvos (Ehwaz): Eh or Eoh

Rune Ehwaz at the beginig its literal meaning was:

Movement and change for the better. Gradual development and steady progress have been noted. Harmony, teamwork, trust, loyalty.

Besides, the meaning of the rune Ehwaz can be also in opposition to other symbols of the runic layout at rune reading.

This arrangement of the runes is called “Ehwaz merkstav”.

Rune Ehwaz reading meaning. The meaning of the rune Ehwaz at divination:

When the rune Ehwaz falls, its interpretation tells about the events which are in place. This moment, about the changes in time. Drastic life changes can seem sudden but they are the result of a slow but sufficient continuous development and growth. Now you take off after you have done hard work, and this makes it possible to look confidently into the future.

Council of the runes Ehwaz.

Change yourself. You will succeed. You must change happenings, in your relationships with others and with your lifestyle. Only after this, there would be external changes in your life. You are approaching something good. Use Rune Ehwaz after targeting runes to do a more quick change. But do not forget to think carefully before use – are you ready for such quick changes. 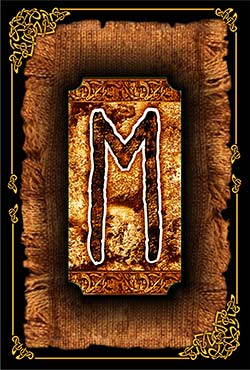 If you had a rune Evaz, Ayvos (Ehwaz) – her appearance means the process of beginning positive change. This is the main interpretation of the rune. However, this sign (Runa Evaz, Ivos (Ehwaz) says that the changes will come in you, if you change yourself, be ready to let in, these positive changes in your own life. Man changes, and life around him changes.

Interpretation of the meaning of the rune of Evaz in divination for love or relationship.

The interpretation of the rune of Evaz in runic predictions is very diverse – this is the rune of new beginnings, a shift from the starting point, a rune of waiting for changes for the better. The appearance of the runes Evaz in the scenario for love or relationship tells about the right choice for the path and proximity to success.

The interpretation of the appearance of the rune Evaz in the context of divination on relationships can be interpreted also in this way – you can see the prospects of your relationship with your loved one and they are quite favorable. However, so that the prospects would not only remain prospects, but it is also necessary to stop, revise the stages passed and with new forces resolutely continue to develop your relationship. The events predicted by the rune Evaz will occur quite quickly, energetically – rune Evaz foreshadows the romantic relations and love, enthusiasm, and closeness. Rune Evaz in the love gives an advice – be in a relationship with a loved one not only for persistent but prudent to be able to accept the right life choice, you need to learn to foresee the consequences of your every step.

More about the meaning of the rune Evaz, Ivos (Ehwaz)

Runa Evaz, Ivos (Ehwaz) in its interpretation broadcasts – Regardless of your question, you are moving in the right direction, you correctly perceive the naturalness of what is happening, you can easily complete the tasks close to success. There are two main meanings in this rune. In one case, it testifies to new phenomena in your life: you can meet new people, you have the opportunity to develop a completely new approach to work, people and life in general, there is a possibility of relocation, moving somewhere. In another case, it is a constant process of moving towards positive change: the formation and development of business, the promotion of ideas, the improvement of relationships with people. The main interpretation of the meaning of the rune Evaz, Ayvos (Ehwaz) – changes, manifested in the appearance of something new.

The deeper interpretation of the rune Ehwaz. Inner content of rune Ehwaz meaning.

Rune Ehwaz is the rune of the passage for new stages in life and movement to positive changes. Rune Ehwaz is equivalent to progressive and continuous development, which is accompanied by an increase in the level of spirituality and positive changes. You are expecting the manifestation of moral courage and perseverance in intentions your motto should become “Everything is ordained around me when I cultivate myself.” The rune symbolizes the horse. Rune Ehwaz also means unity inextricable link between the horse and its owner, that is, the movement, which is destined suddenly meet with an unexpected obstacle. You need to penetrate awareness of duality and depth of events. Not all are useful, at the first glance, and in convenient cases, not all favorable options are intended for you or equally available. It is possible that the most correct decision, is possessing for the true chances of success would it be like those that imply the rejection of any either action.

The additional interpret of the Ehwaz rune meaning.

Rune Ehwaz the meaning of the runes. Key concepts. Change; motion; way; road; continuous growth; the trust; successful ability to adapt to circumstances in different situations; goal achievement. Rune Ehwaz suggests that wisdom is gained over time and not without help communication, Master of the path going. Ehwaz indicates slow but steady and reliable progress.

Rune Ehwaz is associated with Sleipnir, Odin’s horse, who could transfer his Master to other dimensions. Therefore, the appearance of the runes expresses your ability to perform at various levels of being. The wisdom you will gain in communication, and this concerns not only communicate with people, but also with your companion and teacher it can be an animal, plant, or mineral. Rune Ehwaz also symbolizes the need for equal partnership between men and women. Rune Ehwaz – is a rune of progressive measurements and progressive moving forward (progress, moving from the dead center). Prisoners in the rune magic forces provide, movement and development, victory over death, transitions between dimensions and worlds.

the use of the Ehwaz rune in runic inscriptions, in the manufacture of rune amulets and talismans

application of the rune Ehwaz

Rune Evaz, Ivos (Ehwaz) in the manufacture of rune amulets – for rapid changes;

application of the rune Ehwaz in the runic inscriptions:

Runa Evaz, Ivos (Ehwaz) meaning in the runic inscriptions: For the rapid onset of change.

The meanings of the rune Ehwaz in runic divinations are very interesting.

a little more about the meaning of the Ehwaz rune

Runa Ehwaz – the main meaning and interpretation. To understand the true meaning of the Evaz rune, you just need to take and imagine … a horse! Why exactly a horse? The fact is that the symbolic field of this sign can really be compared with a horse, which is rapidly carrying a person forward. In many ways, Ehwaz resembles Raidho – she is also associated with swiftness, speed, change of impressions, the novelty of events. But, if, considering Raido, we put in the first place the road itself, the path, the ride, then Ehwaz is rather a horse that perfectly feels the right road and boldly leads it, provided that the person is not afraid of it.

Rune Ehwaz, the meaning of which we are considering, can be associated not only with riding a horse but also with sailing. These two activities require a lot of courage from a person. He needs to learn to control someone else’s energy (the energy of a sail or a horse) in order to rush wherever he needs to. That is why Evaz comes only to those who are brave enough, bold, and do not feel fear. When a person who is afraid of it climbs on a horse, the horse feels it and starts kicking. The sail, too, will never “obey” an individual who is not sure about the safety of the trip. That is why it is so important to be open to everything that happens, like a child. Children ride a horse with great pleasure because they do not feel any fear of this animal, for them, it is just a beautiful big creature that can ride. Despite the fact that Evaz leads a person, she is not a rune of impersonal power, like, for example, Uruz, but a symbol associated directly with the consciousness of a person. If a person is ready to “break away from the roots”, to change something, to move decisively, then everything will be fine, he will get to the right place. If he does not see the arrival of Evaz, does not feel her strength, and remains rooted to the spot in one place, then he simply misses the happy moment.

Rune Evaz in combination with other runes.

the upcoming change of residence related to relationships, marriage and moving to a new home.

This is an indication of material success

This couple can be interpreted as a successful resolution of the conflict, the disappearance of misunderstanding between lovers