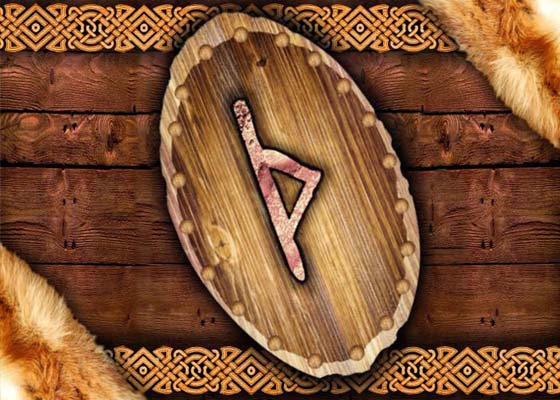 Name of the runes: Thurisaz

The main meaning of the rune is Thurisaz – the gate.

The literal meaning of the runes is Thurisaz: thorn, prick, door, gate

The ancient German name, the meaning of the runes Thurisaz: Thyth (Thurisaz)

The old Norse name, the meaning of the runes Thurisaz: TurisaR or Thurse

Anglo-Saxon name, the meaning of the runes Thurisaz: Thorn

Ancient Celtic name, the meaning of the runes Thurisaz: Thiuth

Old Icelandic name, the meaning of the runes Thurisaz: Turs

Rune Thurisaz at the beginig its literal meaning was:

Besides, the meaning of the rune Thurisaz can be also in opposition to other symbols of the runic layout at rune reading.

Rune Thurisaz – a rune of power. This is the rune of a critical situation, which requires you to fully return.

This is a time to think and get answers. Rune Thurisaz invites you to make a decision. Analyze the past, draw conclusions and make steps, but remember, do not pull the past into a new life. Gates are new opportunities for new Horizons. And it depends only on you, this new one, really becomes new, for you. Rune Thurisaz the meaning of the runes. Symbols of the rune Thurisaz are the gates of delimitation of borders, between heaven and the material world, the rune Thurisaz indicates that the moment of truth has come and it is already necessary to perform a complex inner work – that is, to enrich your experience with light energy so that would essence shone purity of your thoughts.

Do not hurry up. Wait meditating. This is the time to reassess the situation, not for action. Your waiting for a new path. Rune Thurisaz can be considered as “awakening” energy, carrying the realization that exists in the realm of the subconscious. 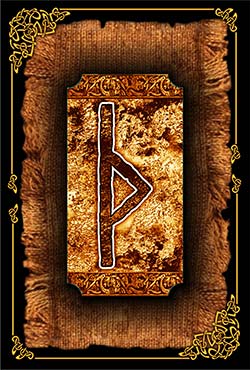 Interpretation of the meaning of the runes Thurisaz in divination for love or relationship.

The appearance of the runes Thurisaz in divination for love or relationship predicts good luck and success. This can be displayed not only in love and relationships but also in all other areas – business, health, career. There comes a time when they start to come true, all your intentions. Also this rune Thurisaz speaks of the necessary help with a partner. Most likely, to solve problems in your relationship with your loved one, you will have to search for advice from a knowledgeable experienced in ambiguity relationship man.

Runa Thurisaz foreshadows the beginning of the moment of reflection in love. You are standing on the threshold, to make a very important life decision about re-growing your relationship with a partner to a new quality level. Rune Thurisaz describes a person close to you as a strong man spiritually, reliable, able to protect you from trouble. Also rune Thurisaz can be interpreted in terms of mutual assistance or desire to assist your loved one.

Thurisaz are the rays of energy that clear the way for the Light among accidents and forces of chaos. Runa Thurisaz is a symbol of the destruction of forces chaos hostile to the cosmic order. Rune Thurisaz protects our Cosmos from returning to Chaos. That is why the rune also has a protective aspect, although the manifestations of the power of the runes can be destructive – aimed at eliminating the old, petrified, and replacing it with something better, more correct. Rune Thurisaz in this aspect can be considered as the guardian of law and order. Rune Thurisaz has great potential for clearing the way and recreating orders where confusion reigned earlier. It is not the manifestation itself, life-giving forces, but rather their transmitter, overcoming the resistance of the old and releasing energy directed to start a change.

The additional interpret of the Thurisaz rune meaning.

Rune Thurisaz tells us about the accelerated pace of your spiritual development. But even in this period of intensive progression, you should always find a reason to make a stop, find time to rethink the old, find a place in the past to integrate new spiritual achievements. In other words, do not try to leave the place where you have not hit yet. You must observe internally calm, exercise restraint, maintain composure and rely on Heaven.

Rune Thurisaz foreshadows the beginning of the action of the profound forces of progress and transformation.

Love; protection; neutralization of enemies; control over the situation; victory; guard against self-deception; good luck with an unpredictable scenario; ability and strength for thinking, intuition, and energy for making the right decisions, concentration all thoughts.

Self-restraint, full of concentration and serious reflection. Until you make a well-thought-out decision, no need to act. As they say, focus and make the right decision. It seems to you that fate played evil with you a joke. But in fact, all this stuff. Destiny just wants you to stop and pay attention to the fact that you can pass by your happiness. In personal and business relations at the moment, your main enemy is haste. You need to analyze the experience.

the use of the Thurisaz rune in runic inscriptions, in the manufacture of rune amulets and talismans

application of the rune Thurisaz

Rune Thurisaz meaning in the manufacture of rune amulets – To destroy enemies or counter them.

application of the rune Thurisaz in the runic inscriptions:

Rune Thurisaz meaning in runic inscriptions – For attracting luck, for protection, for control over circumstances.

The meanings of the rune Thurisaz in runic divinations are very interesting.

a little more about the meaning of the Turisaz rune

Runa Turisaz – the main meaning and interpretation
Before you figure out the meaning of the Turisaz rune, you need to talk a little about the very symbolism of this sign. In translation, the name of the rune sounds like “gate”, but what kind of gate is it, the transition from where and where do they symbolize? It is believed that the rune is located on the border between the mundane and the heavenly, this is a kind of gateway to esotericism – knowledge that is inaccessible to anyone. You cannot go through these gates simply by wanting – for this you need not only to have certain knowledge and inner strength but also to take full responsibility for the consequences of this choice.

The meaning of the Turisaz rune is very difficult to describe in simple and understandable words. It is important to understand here that you will not be allowed into this gate just like that. They are guarded by a Guardian who conducts a pretty tough check of your inner readiness. A person, whose soul is full of illusions, erroneous ideas, base instincts, has no way to go to the other side – through the gates of Turisaz you can only go through completely clearing your spiritual darkness, and for this, you have to do serious work with your inner world. But on the other hand, the rune provides powerful support with a strong spirit.

Runa Turisaz in combination with other runes.

This is a sign of a person’s excessive self-confidence, his irresistible desire to be a leader and his unwillingness to make concessions.

The combination of these symbols can indicate the possibility of injury or injury.

In matters of business and work, he hints to the questioner that business will be suspended due to the intervention of some influential person

A person does not meaning this relationship, therefore he does not think about the consequences of his own words, actions

On the contrary, a person’s actions will cause great resistance from his partner.

The state of human health will deteriorate, but again – not forever, but only temporarily.

A person needs to take some action in order not to be in trouble. If the rune came upside down, a person should think about the events taking place with him. Most likely, he looks at the situation through “rose-colored glasses” and does not see quite obvious things, although the Universe is giving him signs.