Thurisaz rune reversed reading at its appearance in the runic scenario – Do not exaggerate your importance in the processes surrounding you and do not overdo it with delusions of grandeur. Even if you have a sharp mind and understand the situation correctly, you all neither can you influence in any way whatsoever. 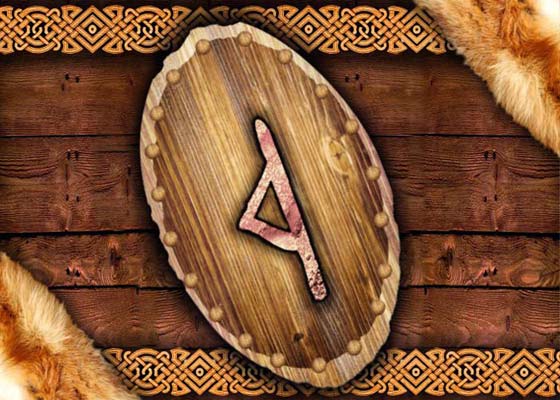 Name of the rune: Thurisaz reversed

The old Norse name, the meaning of the runes Turisas, Thurisaz (Thurisaz): TurisaR or Thurse

Rune Thurisaz reversed, merkstav at the beginig its literal meaning was:

The main meaning of the runes Turisaz in an inverted (reverse) position – a manifestation of weakness (coercion).

The Thurisaz in an inverted (reverse) position. Do not exaggerate your importance in the processes around you, do not flatter yourself. You understand the situation correctly, but you cannot influence the course of events in any way. It makes no sense to try to open the locked door. Taking any solutions, do not hurry and think over everything well first, otherwise, you will create many new problems without solving the old ones.

Rune Thurisaz in a reversed position notifies you that the situation in which you are now is not the best. You fall into the trap of forced action. You are weak in showing your strength. You do not have the courage to see the situation as it really is. You are in the thick of things and it paralyzes you. You forgot that you can get out of this situation, wanting to do it, and emerging from a swamp into the ocean. Much now does not depend on you, but the analysis of the situation should be done to make the right conclusion. The only thing you can do now is disassembling and analyze what is happening and shake your bones for the future.

The reversed rune Thurisaz also warns of the dangerous consequences of hasty decisions. Rune Thurisaz in the reverse (inverted) position leads to the idea that you need to wait because the gate of a successful resolution of the situation is still closed. Very important instructions reversed from rune Thurisaz

For passing the test strip are not only prudence and discretion but also the ability to be independent. activity in achieving victory. Runa Turisaz in a reversed position in most cases is a symbol of active defense. Protection and patronage on the part of higher powers arise only in people who, in the current circumstances, are actively looking for a way out of an unpleasant or difficult situation. The rune will not have a beneficial effect on those who are inactive in anticipation of an opportune moment.

a little more about them ,meaning of the Thurisaz rune

The reversed rune Thurisaz looks like a stop line in front of a traffic light. You know that you need to drive through this intersection, but first, you need to stop. This stop is required in order to think again carefully. The rune comes in the opposite position for a reason: if the direct Thurisaz informs about the internal readiness for the transition, then the inverted one warns that at some point you did not take into account, did not foresee something, so there is a great chance of making mistakes.

Thus, we can say that the meaning of the reversed Thurisaz rune is a warning that there is no need to rush … Remember the adage “If you hurry, you will make people laugh” – it is very appropriate here. The most important thing is discretion, the ability to discern and analyze absolutely everything that happens to you. Action, of course, is necessary, but only when you understand exactly how and why. You will not jump over an abyss without assessing the distance to the opposite bank and not providing the necessary take-off run?

Runa Thurisaz in combination with other runes.

Convinces a person to be patient a little, not to run ahead of the locomotive

The combination informs that the partner of the questioner is trying to subdue him, although such attempts are doomed to failure, since the fortuneteller does not consider his lover or beloved as authority

The additional interpret of the Thurisaz rune at reversed or inverted position meaning.

The additional meaning of the rune Thurisaz in an reversed position. “defenselessness, inhibition ” 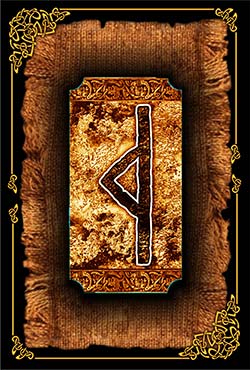 The rune Thurisaz (Thurisaz), its inverted (reverse) position in the runic scenario symbolizes the active protection of a person from anybody, however, feelings of security and protection from above arise only when you actively and independently think in the current situation, if you stay idle, waiting for a favorable moment you can hardly count on help from above. Only after you think over the situation in all possible ways, then you can expect to receive blessings from above.

Necessary conditions for passing tests are prudence – this is the interpretation of the reverse (inverted) position of the Thurisaz rune. It is not only about studying personal factors of motivation but also about the inadequate perception by you of what happened. We can, with a superficial analysis of the problem in which we find ourselves, not see any accompanying nuances.

The Rune THURISAZ in its non reversed, normal (forward) meaning always has a more positive connotation