Kenaz reversed reading at its appearance warns – a person can suddenly become completely exhausted, lose energy. The main thing is not to try to come up with an explanation for this unpleasant fact. This is the direct influence of the reverse rune Kenaz, it just needs to be patiently waited out. However, there is another interesting lure of the inverted Keno, Kenaz. It consists of the following: a person feels strong in his own eyes, but he is not such in reality. 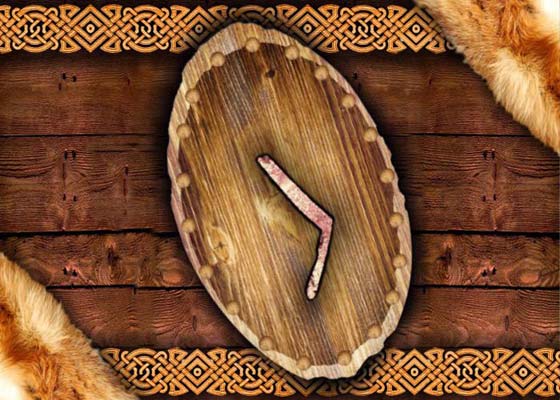 The main meaning of the rune Kenaz in the reversed (reverse) position – “defilement”.

This is a sign of loss, loss of love, loss of a friend. Sign of rune Kenaz – the destruction of some kind of personal relationships and clouding of relations with relatives. The sign says about the rejection of something obsolete. Even if it is very painful.

Name of the rune: Kenaz reversed

Rune Kenaz reversed, merkstav at the beginig its literal meaning was:

Reverse rune Kenaz in the reversed (inverted) position is associated with a shortage of vital energy. It’s as if something is a human being. A person gets into a state as a result of switching off the source of energy. This is a rather undesirable state, as for most people self-esteem is associated with an abundance of power. Self-esteem occurs when there is sufficient “I can.” Testing the reverse runes Kenaz in a reversed (inverted) position is to not lose faith in yourself at that moment when there is no strength. In Christian asceticism, the most difficult test is not to lose faith in the Lord when He turned away. This is the semantic content of inverse Kenaz.

This temptation is very curious. If a person works thoroughly with the runes, if we are sure that the rune fallout is not accidental, then it is very difficult not to believe the rune during the fallout of Kena’s reverse and excellent well-being. And then it turns out that in fact there was no strength and it was necessary to protect oneself from unnecessary actions. Man lives superficially, not knowing himself inner, and not even feeling a hundredth part of what is happening around him.

The inverted Kenaz rune in runic layouts means that there is no reason for despair. You should not look for a way out of the situation in which you find yourself. What is happening is exactly what should have happened to you in this period of your life. Be patient and expect a change for the better. This is the point
However, there is another meaning of the inverted KENAZ rune, KENAZ. Its appearance in the scenario confirms the feeling of strength that is present in a person, which people often do not pay attention to.

The meanings of the rune KENAZ REVERSED in runic divinations are very interesting.

a little more about the meaning of the Kenaz rune

The meaning of the inverted rune Kenaz. To better understand the meaning of the inverted Kenaz rune, let’s imagine what will happen if we are holding a torch in our hands, but suddenly we want to turn it upside down. First, we have to throw it right away, because it turns out to be hot. Hence, we conclude that when the reverse rune falls out, a person will have to part with something.

The reversal of the symbol Kenaz usually occurs under unpleasant events, which are inevitable in this case. And here a lot depends on the person himself: if he realizes that the one who is leaving needs to be released to meet something new, then Kenaz’s living is more or less painless for him. If he tries with all his might to hold the top of the burning torch in his hands (this manifests itself as an attempt to resist what is happening), then he gets burned, gets injured, pain, in a word, a full set of troubles on his head. Inverted Kenaz is a completely unsuitable rune for analyzing events and self-digging. When a person begins to stir up the past, look for the reasons for what is happening to him, in his own behavior, he only loses time instead of finally leaving the past alone and moving on. Reverse Kenaz, on the contrary, discourages self-medication. She reports that the situation has already gotten out of control, and the mandatory intervention of a specialist is required.

Rune Kenaz in combination with other runes.

Indeed, we can say that a person brought on all troubles himself, and this is only his fault

It is necessary to stop resisting the changes that are taking place altogether, because, otherwise, you can slow down your development for a long time

The stagnation will be very long

It is important not to try to save what is “dying”, not to keep the person close to you, but to give your partner the opportunity to find happiness in another union.

A bad sign that if people do not part right now, then soon their union will be filled with mutual hatred, poisoning the lives of both

The additional interpret of the Kenaz rune at reversed or inverted position meaning.

The additional meaning of the rune Kenaz in an reversed position. “poverty, shortage” The most powerful forces are not distinguishable, not perceptible, they are not registered by habitual organs of sense. They are so perfect, fundamental that gross intelligence cannot touch them. The sense organs do not have such an opportunity, to feel the mighty wave of the force. For this, mantic systems are used. Using them, a person can find reference points in these streams, phases of life, meanings, which one or another moment of life assumes. Sometimes these tips do not cause much confidence, as it is at odds with our sense of life, but the practitioner knows that the runes are never wrong. You need to be able to read them correctly.Enough dangerous to ignore the rune Kenaz, Kenaz (Kenaz). The runes do not favor those who ignore their clues. In this case, it is better not to touch the bag with the runes, and if you already started, then play by the rules to the end. In the opposite case, trouble and loss of self-esteem for these games are likely.

The Rune KENAZ in its non reversed, normal (forward) meaning always has a more positive connotation

The meanings of the Rune Kenaz reversed in runic divinations are very interesting.

You may have lost your job, friend, or loved one. Maybe something inside you is crumbling. It hurts you a lot. Rea assured: the time you lost has outlived its time limit and you simply don’t need it anymore. After some time, when the pain subsides, you will understand for yourself everything.
This rune is rune Kenaz in a reversed (reverse) position that requires you, without doubt, to cast away the past and be ready to live with the emptiness inside for some time.

Very dangerous is a superficial deepening into the layers of the unconscious, without a serious attitude to this process.
Rune Keno, Kenaz (Kenaz) reversed position. The main theses. The loss; defilement; wandering in the dark; the breakup of friendship; failure; lack of vitality; confusion; energy loss; ending a relationship; a mess (confusion).