Laguz reversed reading at its appearance in the runic scenario, broadcasts – you are not protected, and therefore vulnerable. You may be hurt. You can expect a stop set up in business or treason in intimate relationships. 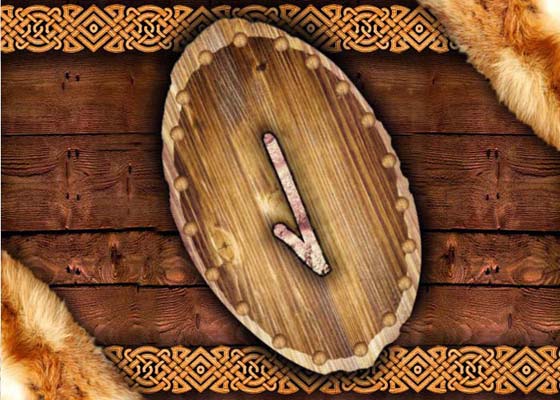 The main meaning of the rune Laguz in an reversed position – “ Madness, folly ”.

The main meaning of the runes – a warning of possible failure. Depression; unfulfilled desires and intentions.

Name of the rune: Laguz reversed

The ancient German name, the meaning of the rune Lagus, Laguz: Laaz (Laguz)

Anglo-Saxon name, the meaning of the rune Lagus, Laguz: Lagu

Rune Laguz reversed, merkstav at the beginig its literal meaning was:

an indication of a period of turmoil in your life. Wrong decisions, lack of creativity, and a sense of stagnation. Fear, circular motion, avoidance, wilting. Madness, obsession, despair, perversity, illness, suicide.

The main meaning of the Laguz in an reversed or inverted position – “Round circulation, fear and fright.”

The meaning of the rune Laguz in the reversed (reverse) position interpreting indicates a possible blocked channel of contact with your intuition, internal leaders. It is this condition that leads to all sorts of breakdowns in the human psyche. In this situation, any desire to cause intuition to cooperate can lead to the fact that from the depths of your soul spill out, attracted negative deposits, which will lead to further deterioration of your condition. Now you need completely relax and find that quiet trickle of your pure intuition, which has been squeezed by the pressure of your insensitivity. Hear the voice of your inner guiding knowledge and try to trust it. Learn his voice and he will never let you down.

Interpretation of divination, the meaning of the rune Laguz in a reversed (reverse) position:

The main theses. Caution sign; interference; wrong foreboding; unfulfilled hopes, betrayal of a loved one; temptation; nervous breakdown; The loss of this sign is a warning about a possible breakdown. Decline, regress, departure into oblivion (drug addiction, alcoholism, treason). The man smiles at you in the face, and behind his back is plotting machinations.

Laguz reversed at the runic practice

The Laguz rune dropped in an inverted position, Laguz is trying to convey to you that you need to suspend the implementation of your plans for a while. You should understand that everything you are doing now is a waste of time. It may seem like a defeat you don’t deserve, but it’s really because you’re emotionally drained. Rune Laguz persistently gives you advice not to drag yourself deeper into the captivity of false aspirations. Stop. Think and find another favorable time for this. Otherwise, put yourself on the brink of self-destruction.

The meanings of the rune LAGUZ REVERSED in runic divinations are very interesting.

a little more about the meaning of the rune Laguz

The meaning of the inverted rune Laguz. If we perceive the direct symbol as a sign of sensuality, high spirituality, and intuition, then we can say that the inverted Laguz rune acquires the exact opposite. If we use our natural qualities and subtly feel everything that happens to us and in the world around us when a symbol falls out in an upright position, then its reversal will indicate that we have lost this thin thread of intuitive connection with what is happening. A person under reverse Laguz is literally behaving stupidly, cannot analyze his own actions, and adequately assess the situation. Of course, in this state of affairs, his affairs will go not uphill, but downhill, and very quickly.

When the reverse Laguz comes, you cannot just look at what is happening without taking any action, otherwise the current will carry you so far that it will be very difficult to get outback. If an inverted Laguz falls out, grab the oars and row, but not mindlessly, not just like that, but after analyzing the situation. Take a look around, see which shore you need to sail to, and then manage your boat wisely. If favorable symbols appear next to the reverse rune, you will be able to get out of the maelstrom without serious consequences, but if negative signs appear nearby, trouble cannot be avoided. If you ask about the source of your problems, and the runes answer you by falling out of an inverted Laguz, perhaps all your troubles began because of some woman. I would also like to note one more point. Despite the fact that most runologists use the standard and inverted interpretation, there are also those among them who take into account the “reflection” of symbols. If you also adhere to this principle, keep in mind that the meaning of the Laguz mirrored rune is a water flow that has no direction, i.e. essentially water going into the ground. This interpretation can help you figure out a difficult situation if the symbol fell out “reflected”.

Runa Laguz in combination with other runes.

The combination suggests that the person herself chose the path of least resistance, surrendered to the power of the flow, and now reaps the benefits – the flow has taken her to the wrong place.

The combination clearly indicates the desire to subordinate a person to his will, to “crush” him with his love

If we are wondering to a man, then it is very likely that his beloved will simply run away from him, and this will happen soon

The additional interpret of the Laguz rune at reversed or inverted position meaning.

The additional meaning of the rune Laguz in an reversed position. “unreason, foreboding” 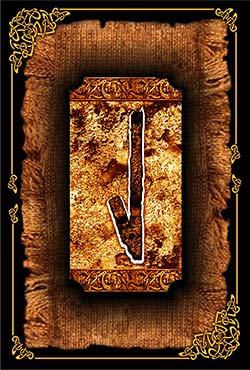 Laguz in a reversed (reverse) position says: Your “sixth sense” has failed you and directed you in the wrong direction, to the place where you will not be able to properly demonstrate your abilities. You can expect a strong temptation to the easy way, negative things and actions that will bring only disappointment. You probably spent too much effort to achieve an unrealistic plan now. Something has become very important for you, and you are eager to get what you want no matter what, putting in all your efforts. But in this position, you must wait for a breakdown. (You are so eager to get it, that in the absence of an immediate result, consider it a collapse). No one can jump higher than his head, it is impossible to use the more forces available to him, and not to wait for a counterattack. You do not have unlimited resources. You sacrifice other aspects of your personality to your desire, borrow energy and strength from them. Apparently, you have made an ideal out of the desired and, even if you reach your goal, you can hardly enjoy it fully. Perhaps it would be wiser to abandon this unattainable goal, but by no means prohibit yourself from ever achieving it, but simply realize that you do not really need it?

The rune Laguz in a reversed (reverse) position. Try to control yourself: you are on the verge of a nervous breakdown.

The meanings of the Rune Laguz reversed in runic divinations are very interesting.

The interpretation of the runes. Rune Laguz interpretation, the value of the runes. Internal content: reversed (reverse) rune Laguz often speaks of the inability to draw wisdom from the sources of their own intuition. As a result, the intuitive principle of your essence is weakened, violating internal balance. Now you are required to turn inward to yourself. The interpretation of the runes. Laguz in a reversed (reverse) position interpretation, the meaning of the runes. Magical application: Application in rune records (rune scripts), also in the manufacture of runic amulets: Laguz – is the rune of premonition and fantasy. Increase in vital energy; prosperity; aggravation of intuition; helps the development and manifestation of extrasensory abilities; helps in the process of comprehending and mastering the secret laws of the universe; in everyday life helps to get married, to end the separation and the end of a quarrel with a loved one; helps scientists to complete experiments, to solve the problem.

The Rune LAGUZ in its non reversed, normal (forward) meaning always has a more positive connotation