Raidho reversed symbol main reading of the meaning at its appearance in the layot of the runic scenario – problems caused by changes in the outside world; ending ways of development; indecision; dead end; not a good time to travel; Wrong Way; new opportunities; New acquaintances.
Raidho rune an inverted position is of paramount importance. Surprise. 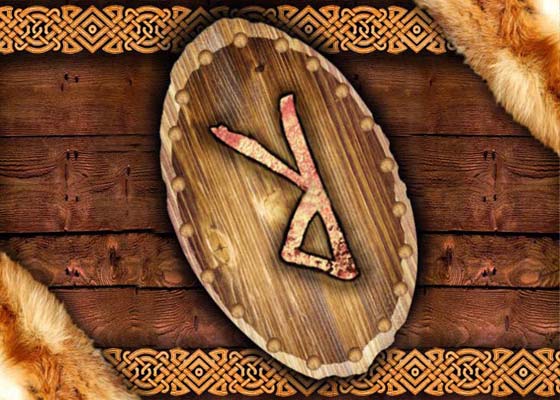 The symbolic interpretation of Raidho in an inverted (reverse) position is uncertainty, the feeling of an incorrectly chosen path. The stop of the warrior at the crossroads, also this rune symbolizes sudden, unexpected trouble. The principle of the correct choice of the path is perverted. The man turned everything upside down and looks at the world distorted. Surprises await this man. Our path is intertwined with the paths of many other people.

Name of the rune: Raidho reversed

Rune Raidho reversed, merkstav at the beginig its literal meaning was:

Most importantly, Rune Raidho reversed at extended meaning defines as:

The rune Raidho in a reversed position. Analyze, think, watch, be on the alert, get ready to attach efforts, mobilize – the world has changed, everything is curled only by your ingenuity. On your way, you will meet something good, but unfortunately, it will not go to you in vain, without effort on your part. If you are lazy and too relaxed, then there is a risk to miss your luck. Try to stand steadily on your feet.

Rune Raidho reversed in the runic scenario clearly warns you. Be vigilant in everything, in every detail. Rune Raidho in the inverted (reverse) position warns of accuracy in unexpected situations so that the consequences of the reactions made to the situation are most positive. Whatever you expect in the absolute unexpectedness of what is happening, do not lose your sense of humor. That often smoothes the possible unpleasant blows from unexpected incidents. Rune Raidho in an inverted (reverse) position suggests that you would be ready to make, perhaps considerable efforts to ensure that any surprises were taken as positively as possible and this laid a good start to the subsequent development of events.

Often the reverse (inverted) Raidho appears at the moment when the break up of relations with another person is being prepared. The misunderstanding has gone so far that conflict is projected into the outside world and the relationship is broken. Sometimes it happens legally. People are not interconnected forever. At some point in time, they have common points, go in one direction, are parallel. Or they go on the same road. The reverse (inverted) Raidho says that the paths diverge, about the mismatch of further programs.

The meanings of the rune Raidho reversed in runic divinations.

a little more about the meaning of the Raidho rune

Rune Raidho inverted meaning. The meaning of the Raidho rune inverted in most situations will indicate some kind of problem related to travel. It can be just a missed trip or troubles on the road, for example, a breakdown in transport, injury, loss of money, or a journey that was associated with unpleasant events (for example, you had to travel to another city because of the news of the death of a relative). As you can see, the Raidho rune inverted itself can be interpreted in different ways, but the clarification is best looked at by the surrounding symbols.

The most positive interpretation of the reverse rune, when there are no “threatening” symbols nearby, is just an unexpected journey that you did not plan, for which you were not ready either financially or morally. Now let’s talk about Raidho’s inverted rune. This symbol will have a negative meaning in business. This may be the collapse of plans that seemed reliable – negotiations disrupted, a business trip associated with several problems, a failed deal. In any case, if a reverse symbol appears in career matters, a person should postpone the affairs he asks about for later. When Raidho falls out in the opposite position, it is worth paying attention to chronic diseases, if you have any, since your health may worsen. It is also recommended to lead a healthy lifestyle, avoid stress whenever possible and listen carefully to your own body: even subtle symptoms can become the first alarming “bells”.

Rune Raidho reversed in combination with other runes.

The combination will hint that much more money will be spent on the trip than planned.

The combination will warn you that you may have to find yourself in the epicenter of a natural disaster.

This couple will inform you that a conflict or a clash with someone’s aggression, bad intentions awaits you.

It is better to abandon them altogether and radically reconsider your plans.

This is a direct indication that the failure of the questioner will be associated with the laziness or mistake of some person.

The combination says that our client is to blame for his troubles.

The additional interpret of the Raidho rune at reversed or inverted position meaning.

The additional meaning of the rune Raidho in an reversed position. “sudden, unexpected trouble” 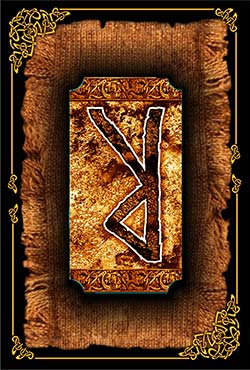 The goal of Raidho in an inverted (reverse) position is the revival of unity. But you should pay attention to what price you need to pay for the restoration of unity – it’s reducing everyone to one level, no merit, no honor, and no censure for wrong decisions. All the same human mass. Rune – Raidho in an inverted (reverse) position states declare, such a revival of unity in fact can only be a temporary visible of some progress in the relationship.

In fact, this is the beginning of the end, so sooner or later a person will want to declare himself and get out of this pressure. Since real unity presupposes the unification in oneself of such different facets of human character on the principles of respect for the freedom of personal self-expression and individual being. That is the whole meaning of true unity – unity in diversity. This is the interpretation of the meaning of the Raidho rune in an inverted (reverse) position.

Such interpretation is also possible. Rune – Raidho. Inverted (Reverse) Position Most likely, you expect unexpected events. Something new is waiting for you, some changes, although it is not known whether they are positive or not. It is possible that new prospects will open up in your career, although you will have to work hard to realize these prospects. In relation to family and friends, we can expect disagreements, conflicts, misunderstandings. Be careful in communication – there is a danger of a serious break.

The Rune RAIDHO in its non reversed, normal (forward) meaning always has a more positive connotation