Algiz reversed or Elhaz rune reversed reading at its appearance in the runic scenario, broadcasts – you are not protected, and therefore vulnerable. You may be hurt. You can expect a stop set up in business or treason in intimate relationships.

So, the main theses for the Algiz rune meaning in a reversed position in the interpretation of the runes in the scenario – deception; vulnerability; the need for flexibility; an offer you should refuse; exile; deterioration of mood and health; protection caution.

Name of the rune: Algiz reversed

Name of the runes: Algiz reversed

Algiz rune reversed, merkstav at the beginig its literal meaning was:

That is to say, take care and be alert, keep a close eye on what is happening inside you and around you – flexibility will be needed everywhere. Stop, move away into the shade. The main thing is not to go to the ram. Circumstances will not help you. The only way out is to learn to adapt to current events.
The main interpretation of the Algiz or Elhaz rune in the reversed position – vulnerability, insecurity.

Rune Algiz reversed or Elhaz reversed position in the runic layouts, broadcasts – you lost your protection, and really vulnerable. You may be hurt. You can expect a stop set up in business or treason in intimate relationships. Be attentive to the proposals that come to you – they may be obviously losing for you. Please note that you can fool yourself if you base your actions on greed, insatiable desire to pound everything under you. These qualities can destroy you.

Rune Algiz or Elhaz at the runic practice

A little more about Algiz or Elhaz rune reversed

The meaning of the inverted Algiz rune reversed. Algiz reversed is a warning about the need to keep your own emotions under control, thoughtful actions and balanced words are your only protection at the moment. If you are in an incomprehensible and confusing situation, the fallout of the reverse Algiz rune reversed encourages you not to hide from problems, but to understand their causes.

The meaning of the reversed Algiz rune informs about illusions or deception. You are heading in the wrong direction or trying to take something that you will never need. Sometimes the inverted position of Algiz reversed may mean that the outcome of the case will still turn in your favor.

Algiz rune in combination with other runes.

It is worth postponing important matters for later…

Don’t expect help from someone you counted on…

The combination suggests that your loved one will persistently impose his opinion on you.

The combination indicates that you have fallen under the influence of your partner, forgetting about yourself

The additional interpret of the Algiz rune at reversed or inverted position meaning.

The additional meaning of the rune Algiz reversed or Elhaz in an reversed position. “ unnecessary things ” 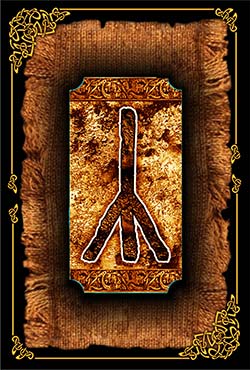 Remember, that no matter what you ask for the Algiz reversed or Elhaz rune, the answer you get will almost always be more complete than the question you asked.

The meaning of the Algiz rune reversed when you reading the runes in matters of love, love or sexual relations is always vague, not very accurately expressed or correct. The correct interpretation of the meaning of the reversed Algiz rune that appears is highly dependent on the values ​​of other runes that are next to this symbol in the rune layout.

The meanings of the Rune Algiz reversed or Elhaz reversed in runic divinations are very interesting.

One of the fundamental meanings rune Algiz reversed ​​interpretation at rune reading – the ability to avoid unnecessarily. If you fail to find a balance between “your” and “alien”, between “necessary” and “excessively”, then you will not only, not get rid of your own problems, but may also have to take care of the problems of other people. The size of the task is more important than its positivity or negativity. Rune Algiz in at reversed, position at the rune divination is always associated with nuances. But at the same time, it always correlates with very large programs. When the Algiz rune appears in the scenario, a person should see all the colossal heaps of problems in his life. The situation in which the rune Algiz fell in at reversed (inverted) position during rune reading may often turn out to be only part of a more significant problem.

That is why success in your actions depends on how not biased you are aware of what is happening. Namely what it is connected with, what to be in interaction.

The Algiz or Elhaz rune in its non reversed, normal (forward) interpretation always has a more positive connotation