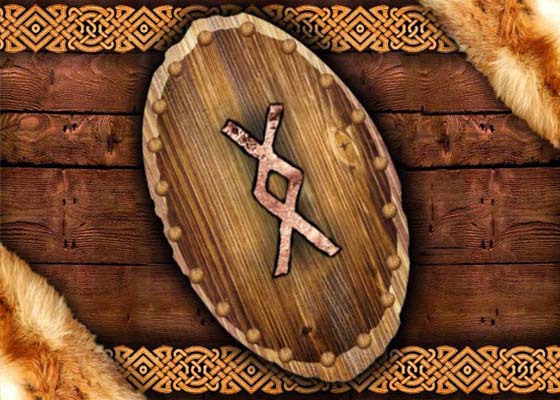 The main meaning of the rune Inguz or Ingwaz – full movement, abundance.

The ancient German name, the meaning of the rune Inguss, Inguz or Ingwaz: Enguz (Ingwaz)

The old Norse name, the meaning of the rune Inguss, Inguz or Ingwaz: Ing, Ingvarr or Yngvi

Anglo-Saxon name, the meaning of the rune Inguz or Ingwaz: Ing

Ancient Celtic name, the meaning of the rune Inguss, Inguz or Ingwaz: Innte

Old Icelandic name, the meaning of the rune Inguss, Inguz or Ingwaz: Ing

Rune Inguz or Ingwaz at the beginig its literal meaning was:

Rune Inguz or Ingwaz at extended meaning defines as:

Male fertility, pregnancy, internal growth. Common virtues, common sense, simple strengths, family love, caring, human warmth, home. Rest stage, time of relief, no anxiety. The time when all the threads are tied and you can move in a new direction. The ability to listen to your inner voice. Integration, pregnancy, expectations, offspring. Fertilization, the beginning. What you should contemplate.

The Rune Inguz or Ingwaz has not reversed (inverted) position.

The meaning of the rune Dagaz can be also in opposition to other symbols of the runic layout at rune reading.

This arrangement of the runes is called “Dagaz merkstav”.

Rune Inguz or Ingwaz in merkstav opposition meaning at extended meaning defines as:

The sign symbolizes the arrival of the period in which everything works out. Any undertaking is saturated energy of growth, addition in a positive, increase in abundance. Everything is committed to progress and everything is saturated with the energy of well-being and prosperity. Rune indicates that you are out of the closed state and can straighten wings. The flow of fertile energies will pick up your flight, and you can be realized. It’s time to get rid of the old, to make place for new achievements. This time of action and boldly entering into absolutely new areas of life. Do not pull your old understanding and merit. The time has come when the quantity turns in the quality of being.

Feel free to part with old habits and things, look back, the world around you is transformed. If you are on the road – try to decide and find your way. It is necessary to drop all past and strive for the new. Rune assumes easy resolution of problems. Approaching lucky for your period, use it with maximum efficiency. Focus on completion started earlier cases. Current affairs are doomed to a successful ending. 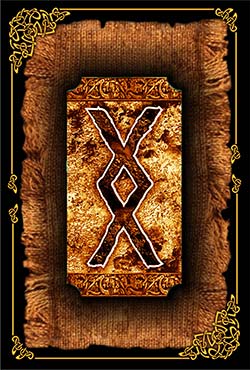 Key meanings the fertility; the conception of a birth an heir; love; transfiguration of the inner world; life force; a visit from abroad; the possibility of marriage.
The appearance of the rune Inguz indicates the arrival of the time of the revival of forces. Now you can achieve the best results in previously started cases. Rune shows the presence of forces necessary for the implementation of any projects also indicates successful problem-solving.

The interpretation of the meaning of the rune Inguz (Ingwaz) in divination for love and relationship.

The appearance of the runes Inguz (Ingwaz) indicates success for you in feelings. Probably successful resolution of accumulated problems, in the relationship.Now you have time to refine the circumstances qualitatively. The situation – in front of you are ready to open new great opportunities. In feelings and relationships, you finally have the opportunity to feel free from restrictions, conventions, and finally, acquire the necessary supply of forces for a new venture. Rune Inguz (Ingwaz) indicates the onset of the hour for the end of the existing life stage. Relationships and feelings that you have now, will definitely have a favorable ending. You can easily get rid of the current conventions in your love relationship. Rune Inguz (Ingwaz) is a symbol of new feelings and new love. Rune Inguz (Ingwaz) represents the need to get rid of old omissions and problems in relationships, contributes to the birth of children or birth of a new one in principle.

More about the meaning of the rune Inguz (Ingwaz)

Rejection of all past, everything that has exhausted itself, what has served, it is time for a new beginning. Now it is possible to clear up all the controversial issues, the exit from the bottom of difficulties. You are like a butterfly coming out of a cocoon to freedom. Such a setting provokes the rejection of many previously familiar things, deeds, and beliefs. However, behind not only the old, stale world but all his fears. Exemption from old assumes the acquisition of a new place in this world.

It’s time to complete the beginnings. You finally came to the completion stage. And you, of course, have enough potential, strength, would finish the job and start a new one. The end is a crown. It is the completion that says about the success of the whole undertaking, but now is the time to make the final beautiful. If you have completed a project – it’s time to start implementing it.

You have the power for this. Perhaps the completion of what you started will make you free, you will feel in with new power, with new opportunities, and this is true. Rune says that if you really stand on your feet, you are firmly established in your internal priorities, you realized yourself at this stage of development – then be ready, to learn a piece of new knowledge, for you it will open new opportunities. Do this with calm and confidence. This rune can also help improve memory, strengthening faith in self, expanding conscious perception, discover new facets of self-realization, gain access to the “higher” forces.

The additional interpret of the Inguz rune meaning.

The main meaning of the rune Hagalaz (Hagalaz) – “complete break”.

The interpretation and meaning of the Inguz or Ingwaz rune additionally symbolize the man’s ability to have an active sex life. An opportunity to fulfill your long-standing sexual goals and intentions.
The additional meaning of the Inguz or Ingwaz rune when it appears in the rune layout speaks of decisive, non-standard actions. A bold move forward on all fronts. Success is guaranteed from above – ahead of the implementation of the plans and prosperity.

A period of rapid and successful progress is beginning, procrastination and stagnation must be left behind. A rapid surge of vitality, enthusiasm, good mood, the renewal of extinguished passion.

Name of the rune: Inguz or Ingwaz

Inguz or Ingwaz – a symbol of fertility. Often used in the closing position. Runes record (rune script), to indicate a successful outcome. This rune is very positive. Fertility; spontaneous release of energy; well-being; favorable outcome; helps to relax and relieve stress; approaching the arrival of a time of rest; balances the vital human strength, that is, simply breathe life. The former phase of existence came to the finish line, a new one is born. Spin the wheel fortune. Also, Inguz (Ingwaz) can indicate a person, who in the future can become a sexual partner, is coming a happy period of life.

the use of the Inguz or Ingwaz rune in runic inscriptions, in the manufacture of rune amulets and talismans

application of the rune Inguz or Ingwaz

Rune Inguss meaning in the manufacture of rune amulets – For fertility, pregnancy.

application of the rune Inguz or Ingwaz in the runic inscriptions:

Rune Inguz or Ingwaz meaning in runic inscriptions – For a spontaneous surge of energy.

Rune Inguz or Ingwaz meaning in runic inscriptions – For bringing any matter to successful finals.

Rune Inguz or Ingwaz meaning in runic inscriptions – To give strength to the result.

Rune Inguz or Ingwaz all the advantages recorded in it will be embodied in of life.

The meanings of the rune Inguz in runic divinations are very interesting.

a little more about the meaning of the Inguz(Ingwaz) rune

span style=”color: #E5F7b4;”>The meaning of the Inguz rune. You can better understand the meaning of the Inguz rune by imagining a butterfly. At first, she is in a chrysalis state, not imagining what the world will look like when she spread her wings to make her first flight in her life. The state of the pupa is familiar, it does not cause any surprise or negative emotions. But a moment comes when there is no longer a need to be in your cocoon, and even more – it is simply impossible, since the cocoon breaks, the form changes and it is necessary to move on. But it is also impossible to continue the path of life as a pupa – you need to turn into a butterfly, completely discarding your old form and radically transforming.

Runa Inguz(Ingwaz), its meaning, description, and interpretation – this is exactly the transition when a person faces a completely new stage of development, the moment before cardinal changes, from which a new countdown begins. This is the stage of joy when a person feels that wings are growing behind him. Everything that interfered with, did not work, created difficulties, will be completed, and positive changes will replace the difficulties. This transition is always accompanied by a sigh of relief. Everything that tormented is resolved and leaves, life is revealed in completely different quality, it becomes more interesting, richer, happier.

Runa Inguz(Ingwaz) in combination with other runes.

pregnancy will come very soon, or it has already come.

the combination may indicate a violation of the law, the consequences of which can be fatal

in the context of the existing problems in a couple, it predicts successful conflict resolution.

The combination indicates the traveling nature of the new activity

This couple can be interpreted as a successful resolution of the conflict, the disappearance of misunderstanding between lovers