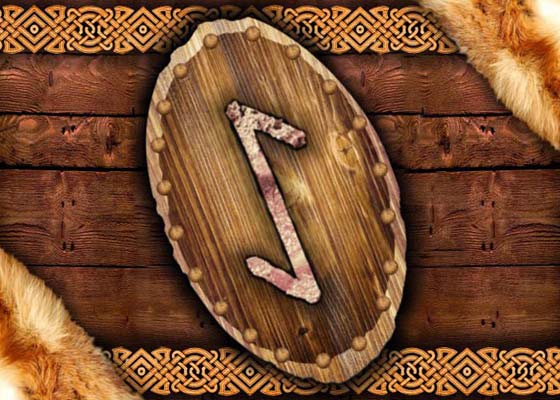 Name of the runes: Eihwaz, Eyvis

The literal meaning of the runes Eihwaz: warrior, weapons.

The old German name, the meaning of the rune Eihwaz: Ezck, Ihwaz (Eihwaz)

Ancient Norse name, the meaning of the runes Eihwaz: Ihwar

Anglo-Saxon name, the meaning of the rune Eihwaz: Yr (Eoh)

Ancient Celtic name, the meaning of the rune Eihwaz: Eihwaz

Old Icelandic name, the meaning of the runes Eihwaz: Eo

Rune Eihwaz at the beginig its literal meaning was:

Strength, reliability, enlightenment, endurance. Defense, protection. An acquisition driving force that provides motivation and a sense of purpose. This indicates that you are aiming for a reasonable goal and can achieve your goals. An honest person you can rely on. Hidden influences, the state of the whole being. Driving forces in the unconscious, motivation, purposefulness, strength, stability, hidden influences, state of the whole being, relationship with the numinous environment.

The Rune Eihwaz has not reversed (inverted) position.

The meaning of the rune Eihwaz can be also in opposition to other symbols of the runic layout at rune reading.

This arrangement of the runes is called “Eihwaz merkstav”.

The need for change. Feelings of anxiety or stiffness in a situation. Reckless haste, disharmony, distrust, betrayal.

Rune Eihwaz reading meaning. The meaning of the rune Eihwaz at divination:

The interpretation of the rune Eihwaz briefly boil down to notify you about unforeseen obstacles in your path. The secret meaning of it obstacles – to give you the opportunity to learn how to get the support of the upper worlds. Any of these obstacles is only the accumulation of experience to improve your connections with the circle of higher powers.

Council of the rune Eihwaz.

Your case is justly, victory is yours. You have propose to start live according to God’s plan, with compassion for your neighbor, in joy to life and with love. Rune Eihwaz fell: You need to show restraint, try to anticipate, perhaps even completely intuitively, as in the situation that has arisen now, choose the right solution and prevent unwanted consequences. 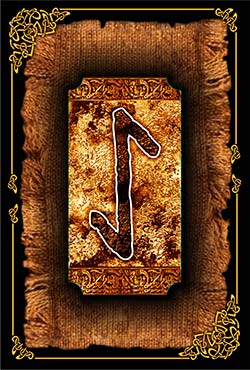 Always remember that your protection should be search in Divine, in God, as much as you accept him. The appearance of the rune Eihwaz indirectly speaks about the obstacles encountered and unpleasant delays on your way. You need to be patient; don’t get too rushed forward but perseverance now is necessary.

Interpretation of the meaning of the rune Eihwaz in divination for love or relationship.

Rune Eihwaz – is the rune, symbolizing obstacles on the path of your relations and tests in love. The appearance of the runes Eihwaz in a predictive scenario for love or relationship foreshadows, favorable resolution of problems in your relationships, obstacles, and troubles in love. In adverse situations try to exercise restraint, try fully trust your own intuition.

Complications with your partner may be insignificant, but still – do not worry, now it is impossible to influence the state of affairs, try to be restraint it may be useful… Think it over about the future – try to think about the situation strategically. Rune Eihwaz tells that you are not open enough in a relationship with a partner. In your feelings inconsistencies of love or relationships, it can lead to losing control over emotions, which you will later regret more than once.

Sometimes the protection that you expect from this sign, maybe quite unexpected, and sometimes – and strange … Rune Eihwaz.

More about the meaning of the rune Eihwaz

The main theses are the meaning of the rune Eihwaz interpreting; protection; excerpt; persistence; change, update; problems that are solved positively. Rune Eihwaz organizes the connection of times, unites the past, the present, and the future. It protects from the world of evil, serves as a symbol of ancestral assistance. Helps to use the sixth sense, to act correctly in different situations. However, you should always remember that the rune Eihwaz is deeply connected with the hidden layers of magic, its appearance is quite ambiguous. Analyze the situation – it is possible that the difficulties which you experience now, maybe the most favorable consequences, and overcoming obstacles can turn into an unexpected impetus for a positive development of the situation.

Rune Eihwaz inspires you to confess to God, as well as for yourself in the true cause and origin of your problems and shortcomings. Do not avoid facing the truth. Do not neglect to advise the rune – understand firmly for yourself – to break out of a denial vicious circle, would take a lot of effort, hard work, time and understanding, for you. Rune denials Eihwaz urges you to look inside your soul, mercilessly flipping everything inside your personality and assessing your past and present behavior. Rune Eihwaz advises you, not to be afraid to reveal yourself and feel the light of your life, the part that.

The additional interpret of the Eihwaz rune meaning.

Eihwaz, the meaning of the runes. IN DETAILS Rune Eihwaz encourages you to wait, the ability to ask and from time to time, even to demand patronage and all-round help of the highest spiritual plan. You should not ask for help from less strong patrons, since the sign suggests that your barriers arising in your destiny can only overcome
in personal contact with the higher heavens. The lower and middle positive spheres are not authorized to help you now, while the higher heavens are waiting for conscription and return on their manual.

Rune – warrior, knight, which protects and leads to the goal. In its most important meaning, rune Eihwaz embodies struggle in the name of life. Eihwaz – one of the most controversial runes. All life is a struggle, any hesitation in the natural process hides internal development, an internal struggle that leads to rebirth. Eihwaz – this is the strongest rune of preserving from trouble and overcoming them. For this symbol, there is no difference between direct writing and reverse position. From this follows that the meaning of the runes Eihwaz is filled not with one but with two semantic loads that mutually complement each other.

the use of the Eihwaz rune in runic inscriptions, in the manufacture of rune amulets and talismans

application of the rune Eihwaz

Rune Eihwaz meaning in the manufacture of rune amulets -To overcome obstacles.

application of the rune Eihwaz in the runic inscriptions:

Rune Eihwaz meaning in runic inscriptions- To increase the power.

The meanings of the rune Eihwaz in runic divinations are very interesting.

a little more about the meaning of the Eihwaz rune

Runa Eihwaz – the main meaning and interpretation. The meaning, description and interpretation of the Eihwaz rune will become clearer if we turn to the properties of the planet Venus and talk a little about them. What comes to mind when we think of this heavenly body? Of course, beauty, softness, a synthesis of opposites. This is how this wonderful rune manifests itself beautifully and softly, unobtrusively uniting polarities. If you do not really understand this metaphor, just imagine such a thing as “the beauty of love between a man and a woman.” What is it? Not in a man and a woman on their own, but in their fusion, interaction with each other. This is the main Venusian principle – to harmoniously and beautifully combine the opposite. Runa Eihwaz, like the planet Venus, is responsible for balance, integrity, smooth transformation.

The traditional meaning of the Eihwaz rune in the mantle is the highest protection, the removal of obstacles and the building up of strength, but the strength here does not increase with the help of violence or pressure, but softly, smoothly, gradually, along with the inner transformation of a person. Often this rune comes at a moment when it seems to a person that there are insurmountable obstacles in front of him. But, in fact, they can and should be overcome using your wisdom, which suggests that everything in this world is interconnected. We can say that the meaning of the Eihwaz rune is always an indication that a person will definitely be able to cope with what he has planned, he will have enough capabilities and strength to achieve the goal, you just need to think a little, reflect, analyze itochoose the right path, walking on which, you can overcome the obstacles that have arisen.
Pay attention to the adjacent symbols that appear in the layout.

Rune Eihwaz in combination with other runes.

Complete victory over an opponent or rival

true love will meet you in an unexpected or unfamiliar place

a goal that you could not achieve in any way, now finally appeared on the horizon

These two runes next to each other indicate that a person will have a temporary pause in business, which will allow him to collect his thoughts, take a break and understand how to proceed.

The combination will communicate the need to act intuitively

This combination suggests that it is necessary to show determination

So, for example, if a person who is hiding something from his partner or spouse turns to us, and such a bundle comes in the scenario, this will be a clear indication that people need to seriously talk to each other, and how as soon as possible

The state of human health will deteriorate, but again – not forever, but only temporarily.