Rune Uruz, its an inverted or reversed position directly tells you – there is a situation of decay, that is, an incorrect designation channel, the wrong direction of force. You should learn to hear the alarms.

The basic meaning of rune Uruz reversed (inverted) may indicate loss of opportunities, unused chances. The interpretation of the meaning of the rune Uruz in the reversed position surface accent should lead you to the need to analyze your internal and external state in order to determine where the breach occurred, through which strength is gone. Why there was a failure in the right direction of the force.

Name of the rune: Uruz reversed

The old German name for the rune is Uruz (Uruz): Uraz (Uruz)

Ancient Norse name for the meaning of the rune Uruz (Uruz): URUR, new-Urokke

Anglo-Saxon name the meaning of the rune Uruz (Uruz): Ur

Rune Uruz reversed, merkstav at the beginig its literal meaning was:

The main meaning of the rune is Uruz in the inverted (reverse) position – the cancellation and weakening of the force.

The main theses. The Rune Uruz in a reversed position – this is a weak volition; lack of strength; ailment; failure; lost opportunity; low viability; disappointment.

Rune Uruz advises – look for a way out, try to overcome the stamps of your worldview, try to understand what you absolutely would not want to understand. But there is a consoling moment – the one who heard the alarming signals on time usually shocks. For an unknown reason, force does not near future according to your desires. Probably, in the near future you are expected, and maybe already comprehended disappointments and failures. In financial terms, it is a loss, and in an emotional sense, a sense of powerlessness. These defeats and failures can be serious shocks or small annoyances for you, depending on your awareness and understanding of the inner essence of the situation.

a little more about the meaning of the Uruz rune

The meaning of the inverted Uruz rune. Now let’s talk about those who are afraid of this symbol or try to resist its effects. Most people are used to controlling their lives inside and out. And, of course, they do not like it when plans collapse, circumstances change and something outside intervenes during their measured existence. But the powerful power of this rune does not bother at all – it will still come and destroy what should be destroyed. This is exactly how the reverse Uruz works – it sees that you are acting incorrectly, therefore it destroys everything, drives you into complete despair, but in the end makes you feel respect for yourself.

Now let’s talk about the meaning of the Uruz rune in divination for relationships if it goes upside down since there are also nuances here. First, the rune may indicate too low self-esteem of a person, i.e. for a man it will be the role of “mama’s son”, and for a woman, for example, the presence of psychological problems, complexes, fears. Both that and another interfere with building relationships – this is what the reverse symbol will speak about. The second meaning of the Uruz rune in love and relationships, when we see it upside down, is the unreasonable use of its power, when a person, for example, does nothing, because he is sure that the beloved or beloved will not go anywhere. Here you need to pay attention to the adjacent symbols, as they can show cause and effect.

Rune Uruz in combination with other runes.

Desperate resistance to circumstances that really shouldn’t be thwarted

The combination clearly speaks of the passivity of a person and the subsequent cooling of relations, freezing of feelings

It will literally force the questioner: “Do not sit still, go, act, take, be active – you really need it now!”

The additional interpret of the Uruz rune at reversed or inverted position meaning.

The additional meaning of the rune Uruz reversed position. “ dependence” 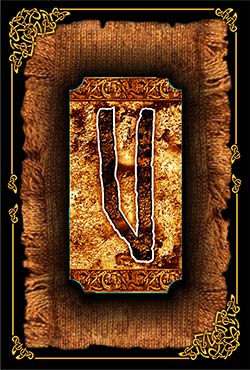 The rune Uruz is a rune of loss of strength, loss of health, and opportunities. Find a way out of a deep hole and find true harmony of yourself with the external world, because all good comes to you from within. The rune Uruz that fell out in the rune layout in an inverted position directly indicates a situation in which the higher forces turned in the wrong direction, which led to a dead-end and, as a result, to a loss of strength and vital energy.

In personal relations, the rune Uruz in a reversed position may indicate a certain dependence. This may be a dependence on bad habits (drugs, alcohol) or vice, a material dependence on a person, or a dependence on an upside-down partner. If your question concerned your loved one, then in the upside-down rune Uruz, Urus (Uruz) can indicate problems in the stage of sex. The amazing events taking place in the world around you, only reflect what is happening inside you. To know, overcome the resistance of the outer worlds, you can only if you overcome yourself.

The mejjustngs of the Rune Algiz reversed or Elhaz reversed in runic divinations are very interesting.

The meaning of the inverted Uruz rune is poor health, health problems, disease conflicts disable you for a long time. But all this is not fatal: you just did not pay attention to the symptoms on time, led an unhealthy lifestyle, or refused the proposed prevention, and now you have to get sick.

It is preceded by outer harmony exclusively conflicts. A person who is in contradiction with herself meets with resistance and opposition from people in the most unimaginable life situations. Council of the runes Uruz. Think over the situation, look inward and try to figure out why your inner world is in conflict with the outside. Achieve, the work of your internal forces on you, not against you. You need to seriously understand your attitude to your own self.