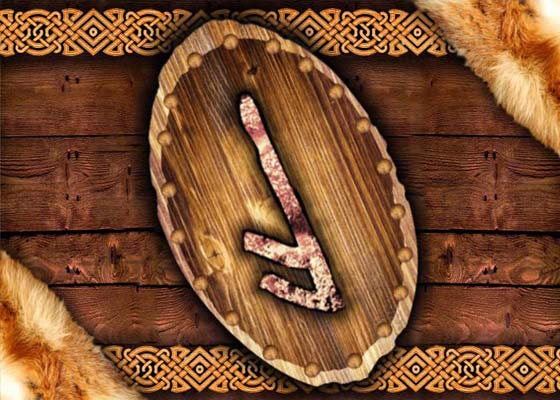 The main meaning of the rune Ansuz in an reversed position – “ Lethargy ”.

Name of the rune: Ansuz reversed

The ancient German name, the meaning of the rune Ansus, Ansuz (Ansus):Ansus, Ansuz.

The old Norse name, the meaning of the rune Ansus, Ansuz (Ansus):Ansus, Ansuz.

The ancient Celtic name, the meaning of the rune Ansus, Ansuz (Ansus):An.

Rune Ansuz reversed, merkstav at the beginig its literal meaning was:

Misunderstanding, delusion, manipulation by others, boredom. Vanity and arrogance. (Odin is a powerful but two-faced god. He always has his own plans.)

The main meaning of the rune Ansuz in an reversed position – “futility”.

Advice rune Ansuz (Ansuz) in the opposite (inverted) position. It is necessary to overcome the despondency and with a clear mind to investigate the situation. Notice that many of the acts you committed were not wise. And most importantly, be grateful to fate, for the fact that she provided, for you. It is a time for the test with which you can become stronger and something to understand. Be on the lookout, advice can come to you, from people who cannot be impartial, they are near to you, solely for their own benefit. Rune Ansuz (Ansuz) in the opposite (inverted) position tells of your vain actions. You act unnecessarily mindlessly, and this is the cause of your displeasure. You do not see signs and ignore external and internal clues, which causes displeasure of your soul. Your situation indicates some extreme accumulation of negative and the point of transition to a new quality. Hear what your soul wants from you, and try to follow its advice. Since your mental analysis is most likely not true.

The reverse (inverted position) rune of Ansuz (Ansuz) is interpreted distinctly and without options – this categorical “no” from the Higher World is not a ban, but a very specific warning. The fallen inverted rune of Ansuz (Ansuz) says that the next thing is a break in the probability that it is natural for you to perform a rash, rash act, to do something that you would not expect from yourself. Your search is full of illusions, the directions of the development of the situation are chosen erroneously, and the methods of achieving goals are unjustified.

The reverse Ansuz (Ansuz) falls out when you intentionally or unconsciously go to the trick and deception, or similar actions. The appearance of the rune Ansuz (Ansuz) in the reversed – a signal that it would not hurt you to reflect on internal honesty, on overcoming unnecessary illusions, the essence of which is self-deception, on the destruction of thoughts associated with the internal “ego”, self-interest and mercantile interests. The reverse (inverted) Ansuz (Ansuz) indicates the appearance of gifts that are destined to be ignored. It is common for a
person to ignore signs that are sent to him from above, that is, to ignore his patrons.

The meanings of the rune ANSUZ REVERSED in runic divinations are very interesting.

a little more about the meaning of the Ansuz rune

The rune Ansuz, its reversed (reverse) position is interpreted in this case as follows: “Whatever you are guessing, one thing is clear, you are in a confused position and are concerned about this. Your actions seem vain to you, and the events are incomprehensible.Failures, difficulty in disclosing oneself when communicating with loved ones, can become a big psychological barrier for communication in general. Look philosophically at what is happening, transitions occur in your life that can be painful.

All these vain hopes, decisions and actions are characterized by the Ansuz rune in an inverted position. This rune is interpreted in turn as a warning. This is a categorical “no”, which refers to you from that other world. If, during fortune-telling, you drop out exactly such an ANSUZ rune in an inverted position, then this only means that you will have to expect many rash steps and decisions from yourself that you will not be satisfied with. All your methods and ways of solving the situation will be wrong.

Rune Ansuz in combination with other runes.

The combination of symbols suggests that material goods, property will not come to you by themselves. Use not only strength, but also intuition.

In solving important matters and situations, it is worth taking a pause, trusting your inner voice …

One should not hope for help. You can only rely on your own strength …

The combination suggests that you are shamelessly trying to impose someone else’s opinion.

The combination indicates that you have fallen under the influence of your partner, forgetting about yourself

The additional interpret of the Ansuz rune at reversed or inverted position meaning.

The additional meaning of the rune Ansuz in an reversed position. “reluctance, disgust” 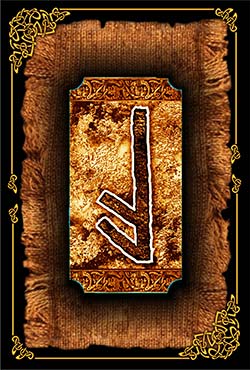 The reverse (reversed position) of the Ansuz rune indicates laziness, unwillingness to learn, a biased assessment of the current situation. The reverse (reversed position) Ansuz gives an indication of the unreliability of the sources of suggestions and suggestions that are offered to us. In the reversed position, the Ansuz rune (Ansus) warns that one should not believe his ears, this is a lie or a provocation. In the (reverse) upside-down position, the Ansuz rune (Ansus) indicates a lack of necessary information and a lack of clarity. You have the opportunity to fail and get a hard life lesson. In some cases, a reversed rune indicates an older, older person who may be the cause of your problems. The rune in the reversed (reverse) position of the rune Ansuz (Ansus) can warn that fate has the opportunity to give a smack for the incorrect use of magical knowledge.

The Rune ANSUZ in its non reversed, normal (forward) meaning always has a more positive connotation